Cargo Services (UK) Ltd. pride themselves in being able to offer their customers exceptional stevedoring and shipwright services for both import and export cargoes 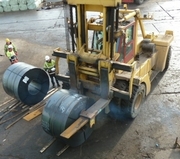 We are often asked "what is a stevedore?" and "where does the word come from?"

In simple terms -
A stevedore is someone who loads and unloads ships. It comes from the Latin word "stipare" which means to pack or stuff. In the late 18th Century, the word "stevedore" came into existence in the U.K., being derived from trading links where the words "estivar" and "estibador" were used in the Portuguese and Spanish Ports.

In the early days, the cargo holds of sailing vessels would be filled to capacity as every bit of space would be used to "pack in" the individual items of sacks, bags, barrels, cases and crates which made up the total cargo. It was very much like the furniture removal van which is used today when we move house, where the removal firm will fill the van up with heavy items in first and lighter items on top right up to the roof space.

Stevedoring is one of the strongest foundations on which Cargo Services is based with a wide array of skills, expertise and efficiency which have been built up over many years. The Directors have been very keen to recognise that the success of the Cargo Services Group has evolved from its Stevedoring service and has encouraged a theme of continuity in its portfolio where apprenticeships form an integrated and important aspect of the Group's on-going development.

It is no small coincidence that both of the leading UK Steel Manufacturers - TATA Steel UK and CELSA Steel UK have appointed Cargo Services (Stevedoring) Ltd. as their preferred stevedoring company to handle all of their seaborne traffic in and out of South East Wales.

Stevedoring also includes various other add-on services all of which are readily undertaken by Cargo Services' employees such as "tallying", "stock-checking", "sampling", "sorting", "weighing", "wrapping", "sheeting","labelling" and "paint marking" of cargo.

The work of Shipwrights which goes back to the 12th Century, traditionally refers to the skills of shipbuilders of wooden vessels and subsequently those who carried out repairs to the wooden vessels. The latter when going to sea became known as the "ships carpenter".

The shipwright work which is carried out by Cargo Services (UK) Ltd. today is not so much related to the ship itself but to the cargoes it carries on board. It involves the art and skills of positioning and using timbers to hold cargo in place once it is shipped and landed at its point of rest (stowed) in the ships hold; so that it assists and prevents the cargo from moving when on voyage, especially in adverse and stormy weather conditions.

This can sometimes be particularly complex where the hold configuration of a vessel's sides is irregular and also tapers and gradually narrows. Not only can the sides taper but the bulkheads can be of a corrugated design with ledges, ladders and compartmental doorways and recesses to consider. The sides of the vessel are not always box-like and can have the presence of stringers and frames as well as other obstacles such as pillars and stanchions. The lower part of a vessel's hold can sometimes comprise sloping hopper tanks. All this has to be assessed by the shipwright.

This means that the shipwright's work is very much that of "thinking on your feet" as it requires quick reactions to what is in front of you in terms of the landed cargo and its alignment with the shape of the ship's hold. Various techniques will be deployed known as "shoring" and "tomming" of the cargo, utilising vertical and horizontal timbers and cross-bracing methods to construct and erect "benching", "bridges", "gates" and "cribs" (especially where there is "dead space") using all types of timber from wooden beams, planks, blocks, squared lumber, wooden battens and boards, specially shaped "slivers", "wedges" and "chocks" all held together with large nails and sometimes large bolts.

All the timber used aboard the vessel for securing the cargo is known as "dunnage". The quality of the dunnage supply - which can be softwood and hardwood timber - must be guaranteed bark free and free from other forms of fungal growth. Cargo Services (UK) Ltd. always insist its timber supplies are packaged such that they are either "air-dried" to allow free circulation of air, or the package has been Anti-Stain Treated (A.S.T.) which again ensures the integrity of all pieces within the bundle and prevents deterioration of the timber, discolouration, distortion and fungal growth. In some cases the dunnage timber has to be heat-treated as well, depending on the country of destination for the cargo, and Cargo Services (UK) Ltd. is an approved supplier of heat treated timber in its own right with ISPM15 accreditation (see Cargo Services (Shaplands) Ltd.).

Dunnage timber can serve several purposes and with steel cargoes in particular, they have to be dunnaged for the purpose of holding the cargo clear of the tank-top plating (i.e. the floor or bottom section of the cargo hold - sometimes referred to as the "ceiling") in order to avoid cargo damage should moisture, from whatever source, find it's way beneath the cargo. It is also advisable to use flat dunnage boards to prevent damage to the cargo itself from friction which can occur where steel is placed directly on or against other steel. Dunnage is also placed between layers of cargo to bind the stow together and also to build up even stowage layers, as well as being able to facilitate slinging of the cargo for the discharge operation.